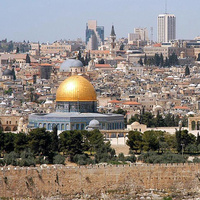 Jerusalem, City of Three Faiths: from King David to the Present

Jacob Lassner explores the deep historical background of the current dispute concerning Jerusalem, a city long considered holy for Jews, Christians, and Muslims, even when it was not the center of political authority in the Holy Land. Among the issues discussed is how the capital and shrine center of the ancient Israelites and their successors became a Pagan and later Christian holy place, and finally a sacred space that most Muslims considered roughly comparable to the Arabian pilgrimage centers Mecca and Medina.

A very knowledgeable resource, but a very bland presentation. More of a lecture. I give it a C.

I enjoyed listening to the Speaker. It was very educational. Thank you!

I enjoyed it very much! Thank you!

You're not going yet!

Register
This event content is powered by the Localist Community Event Platform.