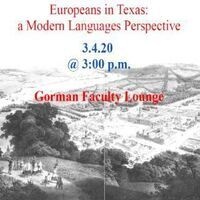 We most often associate Texas with Mexico, and for good reason. However, Europeans–from the Germans and the French to the Italians, the Wendish, and even the Danes–have also influenced what we now call Texas from pre-revolutionary times to today. Did you know that Reunion Tower in downtown Dallas is named for the old Reunion section of the city, itself named for La Réunion, a mid-nineteenth-century French Socialist settlement? That a German dialect is still spoken today in Texas? Or that the oldest known document in the history of Texas is a map of the Gulf of Mexico created by Spanish explorer Alonso Álvarez de Pineda in 1519?

The Department of Modern Languages presents a symposium exploring some of the first, and most unique, interactions between Texas and the Spanish, the French, the Germans, and the Italians.

From German Texans to Texas German: German Immigration to Texas and Texasdeutsch

Italy’s Unification and the Republic of Texas

You're not going yet!

Register
This event content is powered by the Localist Community Event Platform.